Roundnet, the biggest sport you haven't heard of 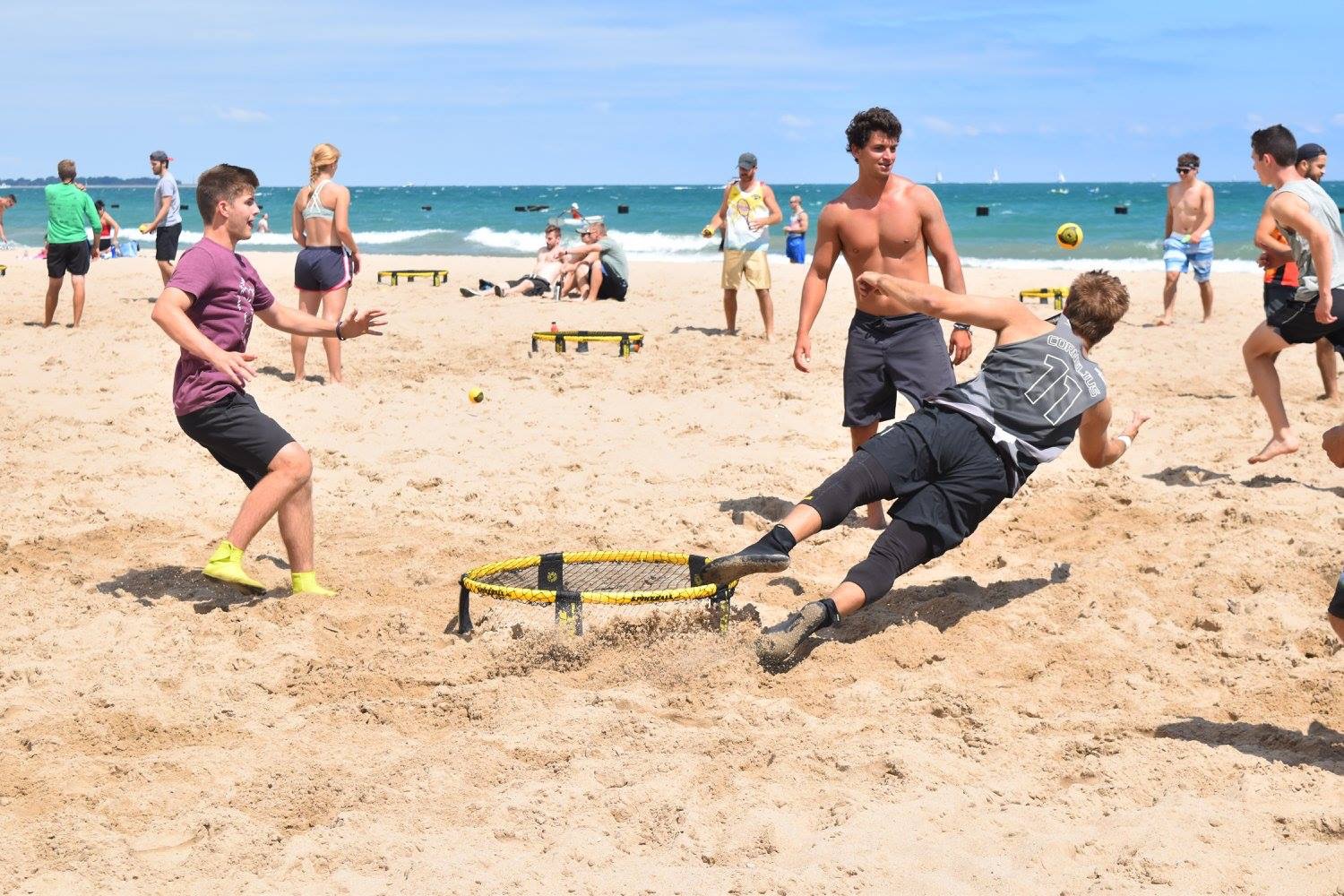 In 2003, Chris Ruder and a group of his friends went on a trip to Hawaii and rediscovered a long lost game from the 80s: Roundnet. Years later, Chris did some research and found out that the original founder never patented his idea, and sales only lasted 2 years before the game disappeared. Seeing the enormous potential in this forgotten game, Chris pooled his money with 5 others and founded Spikeball.

At the time, Chris had a busy job in the sales department at Live Nation Entertainment and was only able to work on Spikeball in the late hours of the night. The game quickly took off and eventually appeared on the famous entrepreneurial show Shark Tank, which boosted its sales even more. Since then, the game is well on its way to becoming the next great American sport, boasting over 4 million players with more and more circuits popping up across the nation. The company Spikeball continues to popularize the sport roundnet and is reaching new players rapidly.

Here’s a fun fact to make you sound smart at your next backyard cookout: Spikeball is the name of the company that produces equipment for the sport of roundnet, similar to how Spalding manufactures equipment for basketball. But, because Spikeball has been blazing a trail to help grow a new sport from the ground up, “Spikeball” has become synonymous with the sport, which is why you will often hear people refer to the sport as “Spikeball” more often than its official name, “roundnet”.

The sport of roundnet is quickly gaining traction, as it is receiving massive recognition from influential figures and big news outlets. Spikeball has already received love from Casey Neistat, Dude Perfect, The Today Show, Inc Magazine, and countless professional athletes and celebrities. Spikeball has grown so much that now it can be seen on ESPN 2 and other major sport channels.

Even the 49ers are playing Spikeball!

Link in case video does not work: https://www.youtube.com/watch?v=v56QMkIHLSw&feature=youtu.be

Spikeball is a cross between volleyball and foursquare with unique rules that make it easy for anyone to play but keep the game fast-paced and challenging. Below is a diagram showing the different positions and steps of a simple Spikeball point. 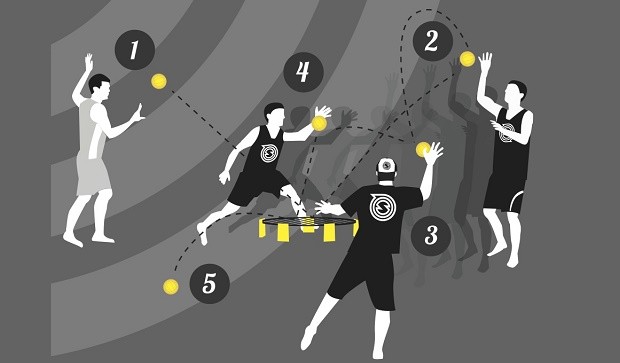 Spikeball constantly engages all four players involved so there is never anyone sitting out or not playing. The rules of roundnet are simple and easy to learn.

If diagrams and step-by-step instructions weren't enough, here's a video guide that does this action-packed game justice

Link in case video does not work: https://www.youtube.com/watch?v=jdRKqguEbas

Spikeball has a unique sense of community as it is so easy to play, and it is accessible to adults and children of all ages and abilities. There are no courts needed, and you can easily pack all of the equipment to carry your roundnet gear around with ease. Spikeball can be played almost anywhere, from an open field to inside of an office. 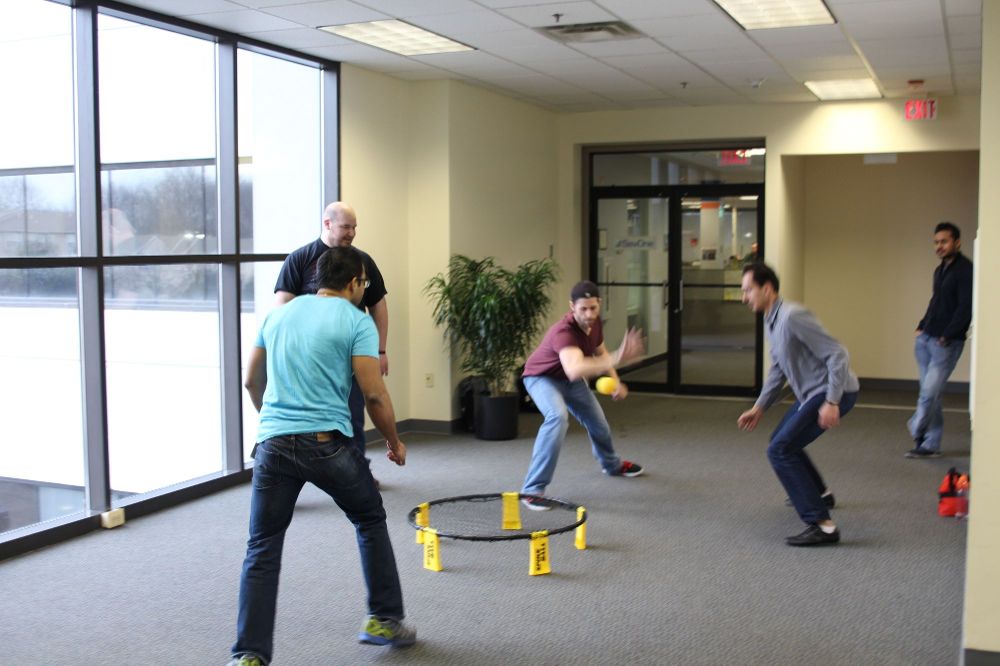 As the rapid explosion of this sport is affecting more and more people, there are extensive circuits popping up that host hundreds of tournaments annually. Along with these tournaments, more camps are popping up across Texas that are introducing and improving players.  This new-found audience comprises of players with all types of backgrounds, including tennis, volleyball, soccer, lacrosse, and many other sports. All of these players are forming a great community through Spikeball which enables anyone to come out and join the game. The massive momentum associated with this sport has attracted thousands of new players as well as earning Spikeball a place in the curriculum of physical education classes within schools. Spikeball has specifically reached out to schools and has made unique curriculum for these schools to use during PE. 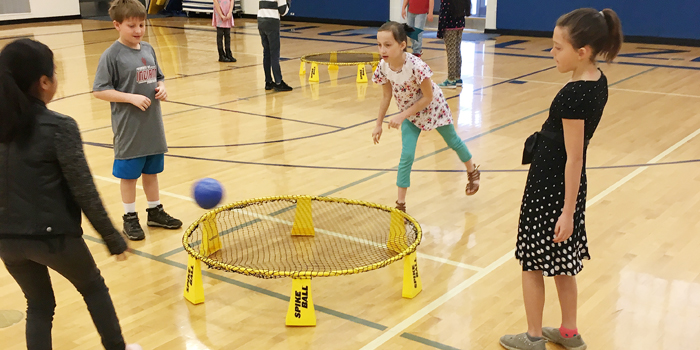 The image above is from Leesburg Elementary where students were introduced to roundnet for the first time. Part of the curriculum involves a staff member from Spikeball coming to the school itself and teaching the students different methods for playing the game.

Looking at the opposite side of the Spikeball spectrum, top players in the sport play in the premier division where you have to qualify for tournaments in order to compete. There are multiple premier players, or “pros”, in Texas that will be working at the camps this upcoming summer.

The benefits of Spikeball

When playing Spikeball you are constantly moving throughout the game, but the risk of injury is minimal. Unlike other sports such as football and soccer, there is no physical contact, and if one player touches another either they lose the point or the point restarts. Youth sports stats from the Statistic Brain Research Institute shows that 87% of parents are worried about injuries in youth sports, and rightfully so, as additional research shows that over 3.5 million kids are injured in sports each year. In addition, according to the National Alliance for Youth Sports 70% of kids quit sports by the age of 13, mostly due to the increased commitment, competitive pressure, and other demands on their life. By teaching kids roundnet at an early age, parents can increase the likelihood that roundnet will be an active sport that sticks with their child even if he/she decides to never compete at an elite level. This is because roundnet is catered towards casual play that allows for the game to be picked up quickly and played almost anywhere.

A great feature of the Spikeball is how comfortable it is to play in smaller spaces. Since the necessary space for Spikeball is so small, it is convenient to play even when there is not a lot of room. This can make it super easy to meet with your friends on last minute notice and quickly get a game in. The quote below is from the Texas Association for the Sport of Roundnet and explains why the sport of roundnet is so unique.

"The beauty of roundnet is that it is accessible to athletes of all levels. It is the perfect competitive outlet for high level athletes who are looking for a new hobby or a change of pace from their current sport. Yet at the same time, the casual athlete can still enjoy the sport because it is easy to learn and offers fun rallies even at a beginner's skill level." - TASR (Texas Association for the Sport of Roundnet)

Besides creating a great community, Spikeball is also a great way to quickly get in a good workout. With modern times bringing more demands on everyone’s time, it’s easy to skip a workout in favor of something else. However, getting a workout doesn’t have to be a chore when playing a fun and engaging sport like roundnet. Professional roundnet players stay fit while weaving between each other in order to keep the ball in play. Below is an example of just how fast-paced roundnet can be when played at a higher level.

Link in case video does not work: https://www.youtube.com/watch?v=mo4qTH-VYGM&t=5s

In the video above, you can see the players passing through and around each other with ease while at the same time maintaining communication. This type of play is part of what makes this game so unique. As the game gets bigger, tournaments such as the ones in the video will only become more widespread. If you want to learn to play roundnet like the players in this video, then you might want to check out our upcoming Spikeball summer camp.

Like anything else, it’s always great to ride the momentum when something is taking off. Another great feature of Spikeball is the fact that there are so many tournaments popping up and there is even prize money available at higher levels. One of the biggest events in roundnet history happened recently on July 4th in New York City. This event aired on ESPN 2 and was watched by many. Tournaments such as these are slowly offering prize money, and as the sport continues to grow rapidly, the prizes will only increase. All of the factors listed above are attributed to Spikeball’s great accessibility and its easy rules that make it so fun to play.

Overall, Spikeball’s unique combination of physical activity, low risk for injury, and minimal equipment and space required makes it the perfect sport for families and kids. More and more families are stepping off the basketball court, and, instead, opting to take the family to the park or beach with a roundnet loaded up in the car.

This one may seem obvious, but this term is where the “spike” in spikeball comes from.

Spike - A touch that results in hitting the ball off of the net. Can be with light or heavy force

The next word is related to the rule in spikeball regarding contact with other players.

Hinder - Contacting another player making an attempt at the ball

These next three terms revolve around the rim or net that is located in the middle of all four players.

Rim - The support system of the net. Contacting rim results in an infraction.

Pocket - Space between net and rim.

Net - The centerpiece of spikeball. The ball is played off of the net to change possession.

The recently founded Texas Association for the Sport of Roundnet (TASR) has been expanding Roundnet within Texas and has recently started new hubs to facilitate more players joining the sport. There are currently HUBS in Austin, Houston, Dallas, and other big cities. As the interest grows in Roundnet, TASR has been connecting more players and ultimately founding more clubs. TASR currently offers lessons as well as camps on their website.

TASR is also running a roundnet summer camp for kids and teens who are interested in playing this fun and exciting sport.

× Kwaddle uses cookies to customize your experience. By using the site you are agreeing to our Terms of Service.